Back Next
Building App
Start your search here for domestic violence programs and shelters near you.
Learn More Got it
Home Articles Survivor Stories I Thought I Knew What Domestic Violence Was 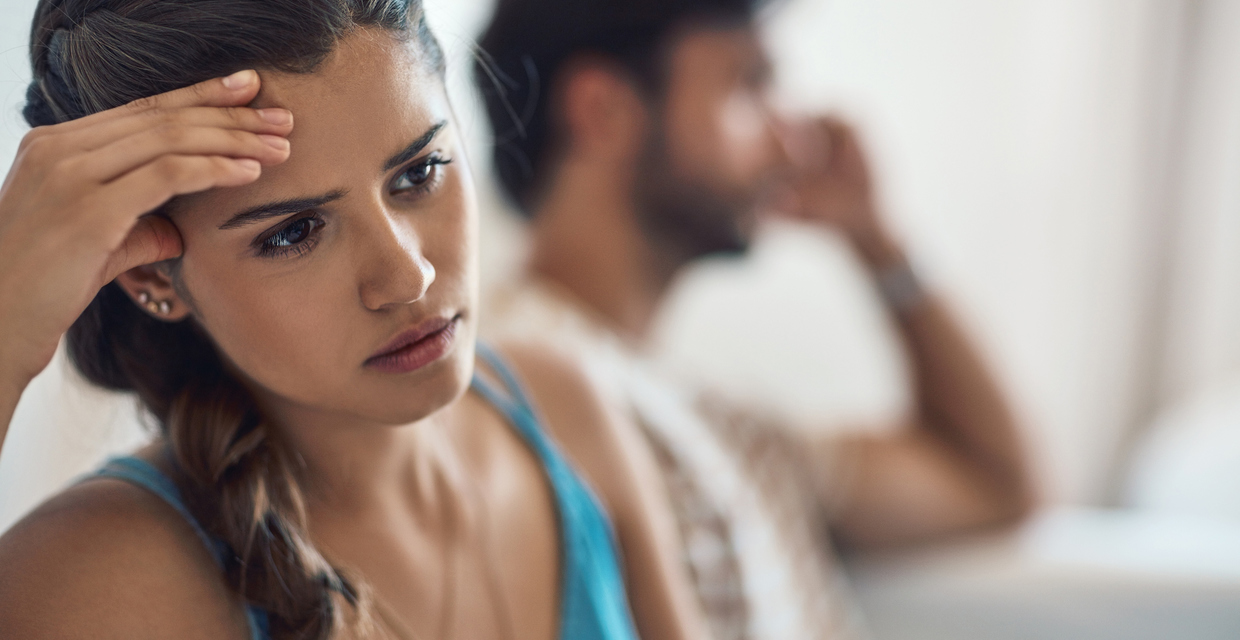 I thought I knew what domestic violence was, but it turns out, I actually knew very little.

The Guy Next Door

At 23, I started dating a man, we’ll call him Alex (not his real name), who worked for the same company I did (yes, the company that was so supportive of domestic violence survivors). A few months prior, my college boyfriend—the person I spent five years with and the man I thought I was going to spend the rest of my life with—had broken up with me. I was 40 pounds overweight, depressed and my self-esteem was in the shitter.

Alex* made me feel special, valued, beautiful. He was smart, thoughtful and good-natured. When he was clean-shaven and smiled, you could see the little boy he once was peeking out from within. He wasn’t especially suave or charming. He was just your average guy next door. He worked in IT. He introduced me to Battlestar Galaticaand Firefly. He drove a Volkswagen and wore Tevas. Tevas.

Also, he was married.

Yes, Alex was married when I met him. He told me he and his wife had been living separate lives for a while (I know, I know). They still shared a home but had their own bedrooms and weren’t intimate. He indicated he couldn’t divorce her just yet, because she wasn’t from the U.S., although he never really explained what that meant. Would she be deported if they divorced? Did he just feel bad for her? He didn’t say and I never asked. I guess I didn’t want to know.

Being married aside, the first two years of our relationship were pretty normal. We talked for hours, watched nerdy TV shows, went for daytrips on his Harley-Davidson, stood in line together for the first iPhone to come out. He spent more time with me than he did at home, and yet all I did was long for him to leave his wife and be with me.

And then he did.

The Glaring Red Flag I Missed

During their divorce, Alex’s ex-wife filed for an order of protection. I went to court with him. The proceedings were all about a cell phone. She told the judge he had been tracking her whereabouts via her phone. Alex stated he was only interested in the phone since he paid the bill. I didn’t understand any of it. I had never heard of an order of protection. I assumed it was something to do with their divorce. Having a partner who’s been on the receiving end of a restraining order is a serious red flag, but I was oblivious.

After his wife moved out, Alex and I grew even closer. He stayed at my place a lot. After all, that’s where we were accustomed to spending time together and I didn’t want to be in the home he used to share with another woman. I relished having someone to come home to. To eat dinner with. To fall asleep next to.

Everything was going great those first few months after his divorce. He was a model boyfriend. He called on the nights he did go home to say good night, even if it was 2 in the morning. He accompanied me to my family’s Sunday night dinners. He brought me flowers. He wanted to spend time with me.

Things were going well. We talked about marriage and kids, but mostly we just enjoyed being able to be out in public together without fear that we’d run in to someone Alex knew.

Then one day, while Alex and I were out to lunch, I reminded him I would be home late from work because I had an appointment to get my eyebrows waxed.

“Aw, can’t you move it to next week?” he pleaded. “I really can’t wait to see you tonight. I was planning on making us dinner.”

Looking back—and I’m not trying to be dramatic here—but that was the beginning of the end. What I had seen as romance was actually his first attempt to control me. And he won. I canceled my appointment.

Weeks went by and then he called on my way home from work.

Again, I thought it was sweet.

But as time went on, we talked more and more about my schedule. Fought more and more about my schedule. Rather than making me feel desired any time he got upset about plans I had that didn’t involve him, I felt guilty. I started to put off dinners with girlfriends so I didn’t have to hear about it from him afterward. I took care of as much personal business (errands and such) on my lunch hour rather than cutting into “our time.”

Still, when we were together, things were great.

Then came the jealousy.

We went to dinner at my mom’s one Sunday evening, and her neighbors were outside. Both of them said hello. On the way home that night, Alex said he didn’t like the way the husband had greeted me. He said he thought my mom’s neighbor was into me and it made him uncomfortable.

Then he started asking about the guys I worked with. Asking, then interrogating. To kick off one of our more ridiculous fights, Alex asked who I sat next to during a meeting. He knew who was going to be there and which conference room we met in. There were two men and two women in a four-person conference room. He wanted to know why I sat next to So-and-So.

“It’s a four-person conference room. I couldn’t not sit next to one of the men,” I told him. He didn’t care.

Fights like that gradually started happening more and more frequently. And somehow, he always won. He was older than me, smarter than me. He always had an answer, an excuse for everything. It was one giant mindf*ck.

Things Only Got Worse

The psychological abuse, the emotional abuse, the sexual coercion—it all started just like that. Innocently enough at first.

While he was on a cross-country motorcycle trip to visit his parents, he brought up the idea of sharing intimate photos. When I’d had enough, though, he begged for more. The next time he asked and I said no, he said I didn’t love him anymore. Of course I did. To prove it—and to avoid another fight—I sent some photos.

I sent photos when he asked, I had sex when he asked (even if it meant crying my way through it). I slept facing him when he asked, because if I rolled over, he would say, clearly, I was no longer interested in him. Any time I refused him in any way, it resulted in a fight that I couldn’t win.

Then came the threats.

Alex no longer worked at the same company as me. To stay in touch during the day, we sent instant messages. Sweet nothings and inside jokes at first. Then mundane “what’s for dinner?” type business. One day, after back-to-back meetings, I returned to a screenful of messages on my computer. I had forgotten to tell him I had meetings. He was livid. He told me to call him right away.

I walked out to the parking lot. The fight started over my not replying to him but quickly devolved into God-knows-what. I wanted out. I wanted to end things. I tried. We hung up and I cried. While I was trying to pull myself together before going back to my desk, I opened my email and saw a message from Alex addressed to my boss. Inside were a number of the intimate photos I had previously sent him.

I couldn’t breathe. I was devastated. I literally wanted to die. As a matter of fact, I decided right there in the parking lot that if I got fired over this, I would kill myself. I wouldn’t be able to handle the humiliation.

I called Alex and screamed at him. Between sobs, I asked him a barrage of questions. What had he done? How could he do that to me? What the fuck was his problem?!

He told me to open the message and click on my boss’s name. When I did, it showed Alex’s email address.

“I didn’t actually send her the photos,” he said. “But I could.”

Things only got worse from there. We skipped Sunday dinners with my family. He didn’t want to risk seeing my mom’s neighbor, and, frankly, I didn’t want to have to pretend to be happy in front of my mom. When we went out to dinner and had a male server, I stared at my menu while I ordered to avoid being accused of looking at another man too long.

After a date during which Alex became convinced I had a thing for the bartender, I got on the back of his motorcycle and held on for dear life. He was driving erratically to say the least. He was speeding and kept accelerating fast for no reason. There was no backrest behind me. I was convinced he was trying to throw me off. I contemplated whether I should roll toward the shoulder of the freeway or just pop my helmet off and hope I died quickly.

One of our worst fights was over the phone while I was driving home from work. I don’t remember what it was about, but I was fed up. I couldn’t take it anymore. I hung up on him and threw the phone at my passenger window. But I quickly fished it out from between the seat and door at the next light because I knew he’d be calling back, and if I didn’t answer, things would only get worse. They did anyway.

“If you ever hang up on me again,” he said. “I will drive directly to Tucson and slit Mia’s throat.”

Mia* was my niece. She was in preschool at the time.

I’m One of the Lucky Ones

Through all of that, it never once crossed my mind that what I was experiencing was abuse. I just thought I was in a shitty relationship. I used to pray he would hit me. For some reason, I thought that was the line. That was the line I had been waiting for him to cross. If he hit me, I’d have reason to leave and never look back.

It took me years—and writing for DomesticShelters.org—to realize what I endured was abuse. Today, I know I’m one of the lucky ones. Today I know that even if he had hit me, I probably still would’ve gone back. I’m lucky he didn’t. Too many women can’t say the same.

After four years together, I finally ended things for good. I had tried before, but he kept threatening to kill himself if I didn’t come back. Finally, it dawned on me: Better him than me.

Alex didn’t kill himself. He sold most of his possessions and moved out of state. Except for calling me the night before he left and asking me to marry him, I never heard from him again.

I’m one of the lucky ones.

* Names have bee changed for safety