Back Next
Building App
Start your search here for domestic violence programs and shelters near you.
Learn More Got it
Home Articles In the News Servicemembers Are Getting Away With Abuse 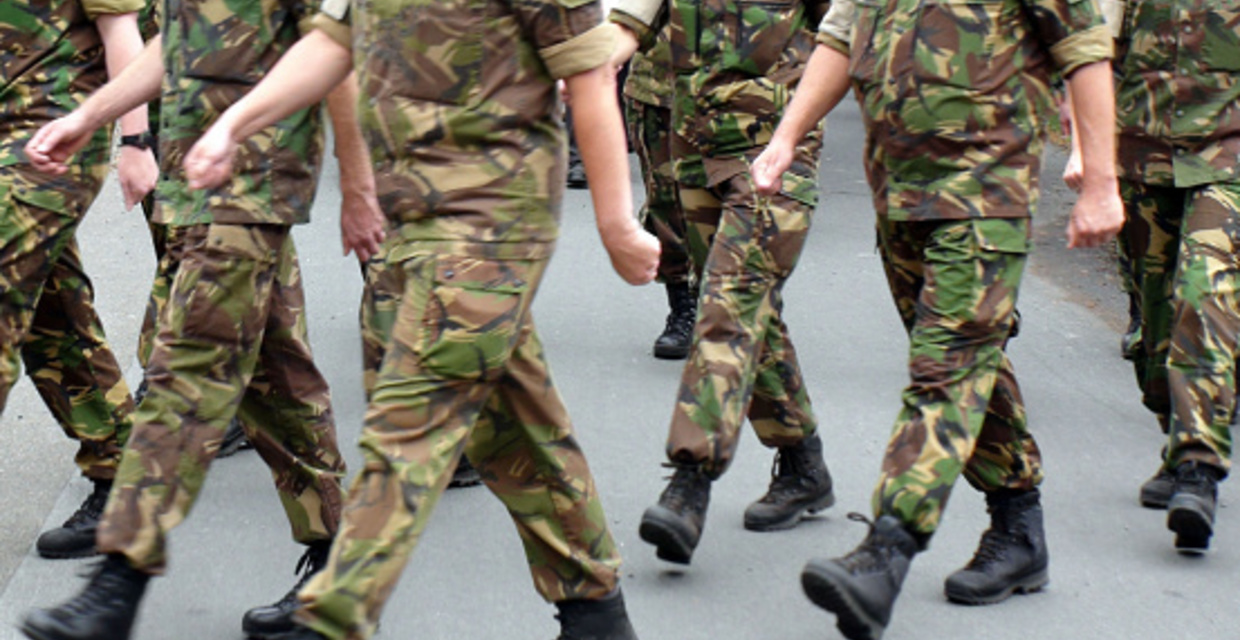 In April 2017, we published a story about compensation available from the military for spouses whose active duty husbands are discharged for domestic abuse. The response from our readers was swift—many of you said that not only is this benefit rarely seen, trying to get a military court to prosecute domestic abuse is often impossible.

“My experience with domestic abuse and the military is that it came down to whether or not the mission was still getting accomplished,” says reader and survivor Carissa Justiniano. “It had very little to do with helping the victim.”

The military has often been criticized in the past for its lackadaisical response to domestic violence, but the case of the Texas massacre—last November, gunman Devin P. Kelley entered a church where he shot and killed 26 people ranging in age from 18 months to 72 years—shown a spotlight on the Department of Defense’s (DOD) shortcomings on this issue.

Kelley had been charged with assault in 2012 while serving in the Air Force after he beat and strangled his first wife and struck his toddler stepson so violently he cracked the young boy’s skull. Kelley was sentenced to 12 months confinement before his discharge was official in 2014, a decision which should have made him ineligible to buy guns under federal law. Instead, he bought several and was investigated twice in the coming years for abusing women (his wife divorced him) and charged with cruelty to animals for abusing his dog.

Law enforcement say Kelley was motivated by anger toward his estranged second wife’s family who attended the church where he opened fire that November morning. Kelley shot and killed himself after the massacre.

The Air Force initially released a statement stating, “The Air Force has launched a review of how the service handled the criminal records of former Airman Devin P. Kelley following his 2012 domestic violence conviction.” They also said they would look into other convictions that had been “improperly left unreported to the federal database for firearm checks.”

Later, they said that their failure to report Kelley’s assault conviction to the FBI database was “not an isolated incident” and that there were several dozen cases in which servicemembers’ prior arrests were not reported. They are currently reviewing some 60,000 cases dating back to 2002.

Why the Military Hesitates to Report DV

Military spouses told us that they never see this so-called compensation benefit the military offers to survivor partners. Lisa Colella says this problem is only the tip of the iceberg. She’s President and CEO of Healing Household 6, a nonprofit independent from the military that helps military spouses find resources and advocates in times of crisis.

She wrote to us after the original piece was published and offered her blunt opinion of the benefit: “I have worked in military domestic violence for years. Service members are rarely convicted of domestic violence and when they are, they are rarely discharged. This program is a load of garbage.”

The problem starts much earlier than the time of discharge. Colella says that when domestic violence is reported on a military base, the base police will call the servicemember’s commander and place the offender in the barracks “for a cool down period.” The commander then has the choice whether or not to take disciplinary action.

In most cases, she says, the servicemember accused of abuse is back on the job the next day. They might schedule a mediation between the spouse and the service member, but that’s the extent of it, says Colella.

Every base is different, she says, but in her experience, the family advocacy programs that are in place in all branches, which are supposed to help in situations like this, are often not notified when a service member commits domestic violence.

“No one goes with the survivor to the hospital,” says Colella, who says they might not find out domestic violence occurred until they read it in the base blotter—an online listing of legal proceedings for each base.

That’s when Colella’s group steps in, tries to contact the survivor and asks how they can be of assistance. At first, her group tried to work in conjunction with Family Advocacy, (the military’s Family Advocacy Program, or FAP, is in place to help with reporting, investigating, intervening and treating cases of domestic and child abuse, among other family-related issues) but says they began to see holes in the program.

“The only thing they can do is call the command, who often doesn’t want to deal with it.” Imagine she says, that most of these servicemembers are in their early 20s. “They’ve just come back from deployment, and their boss is 25 years old. This kind of thing doesn’t always make it up the chain of command.”

Another reason she believes domestic violence gets swept under the rug is to protect the military’s reputation. With growing concerns about increasing rates of PTSD and brain injuries in returning troops, “they don’t want to admit that domestic violence has tripled since the war began,” she attests. “Who would continue to sign up?”

Specifically, the National Domestic Hotline reported that the number of calls from military families tripled between 2006 and 2014. In addition, 83 percent of callers said they struggled with a lack of access to direct domestic violence services.

The other point of contention: Soldiers are in high demand for deployments. Discharging servicemembers has to be done carefully because, she says, fewer troops at the ready could have a trickle-down effect on budgetary decisions by the DOD.

“There are processes in place, but they’re not happening,” says Colella of the programs to help survivors. “Once [domestic violence] has been handed over to command, it’s all done. Even though the family advocacy program might have good intentions, their hands are tied.”

Navy Cmdr. Gary Ross, defense press operations with the Office of the Secretary of Defense, told DomesticShelters.org in a statement: “The Department of Defense is committed to a military culture where domestic abuse of any kind is not tolerated, condoned or ignored. The Department actively encourages servicemembers, spouses and significant others to report domestic abuse. Reporting supports Department-wide efforts to promote prevention, identify abusers early and treat abuse, and also enables the Department to hold offenders appropriately accountable‎.”

What Survivors Told Us

Accountable is hardly what one survivor, Barb*, says the military has been.

“When I went to the military regarding my ex-husband’s abuse, they literally laughed. I was told they were not going to ruin a military man’s career. I wrote the Pentagon. They responded by telling me they had investigated, although they never spoke with me, our son or friends. I still have the letter they wrote me telling me of their ‘investigation.’ Their final response: I was never to contact them again.”

Survivor Jennie Hart, 36, has been married to her servicemember abuser for 15 years. There has been severe physical, psychological and sexual abuse for the whole of their relationship. She’s kept records of it and has been trying to separate from him for a while. But she’s found the Navy is not eager to get involved.

“I went before the NCIS [Naval Criminal Investigative Service]. They released some information [about the abuse] to their board members to determine if the sailor, my husband, needed help. It’s not a legal finding.” The board, says Hart, determined the abuse she was alleging was unfounded.

“They had pictures of his handprints on my legs [that Hart took after his abuse] and they questioned why I would take pictures of that. Even if you have evidence, it gets turned against you.”

Hart says her abuser continues to harass, stalk and assault her. She fears for her life.

When Justiniano reported her abusive husband to a domestic violence advocate at the Air Force base they lived on three years ago, she was told she had to open a case against him. She was nervous but did it anyhow.

What that meant was that her abuser’s base commander and direct unit commander, as well as her direct unit commander, were to decide whether or not her husband’s behavior was “seriously physically harmful.” She was told to not attend the hearing, even though she asked if she could tell her side of things. The board determined her abuse claims were unfounded.

She says the board also had to decide whether or not either she or her husband’s missions were being impacted by the alleged abuse (Justiniano was also active duty Air Force at the time). The board ruled that out as well.

“After that, I felt abandoned by the advocate. It was like I didn’t exist anymore.”

Justiniano says that, for the first six months of their marriage, her 200-plus-pound, six-foot-tall husband would push her around, yell at her, throw things at her and verbally denigrate her.

“He was like Jekyll and Hyde,” she says. “He would tell me he was so mad at me, he just wanted to see my blood.”

But Justiniano escaped the tell-tale markings of stereotypical abuse victims. She was not bruised or battered, and she feels like that’s what kept her military police from taking any action. The 35-year-old has since divorced her abuser, but still suffers from anxiety attacks when she thinks she sees his truck pass her on the road.

In response to these stories, Cmdr. Ross replied in his statement, “The Department responds to all reported allegations of domestic abuse. When domestic abuse occurs and is reported, the Department first and foremost seeks to ensure the safety of the victims. The Department also assists military families seeking to overcome the effects of abuse and provides appropriate treatment for offenders.

“The Department is committed to ensuring military commanders understand that prevention of domestic abuse is critical to military readiness. Effective commanders empower their people to create healthy home and work environments and to intervene in unacceptable and risky situations.”

But Colella, for one, isn’t so flatly optimistic.

“I don’t think the DOD will ever take this on because they have to admit there are consequences of war besides battle injuries. We get a lot of flack because we’re going against the war heroes. We’re trying to get these families serious help, but no one out there is helping.”