Back Next
Building App
Start your search here for domestic violence programs and shelters near you.
Learn More Got it
Home Articles DomesticShelters.org Book Club The Next Book Club Pick Is a Memoir of Terror and Survival 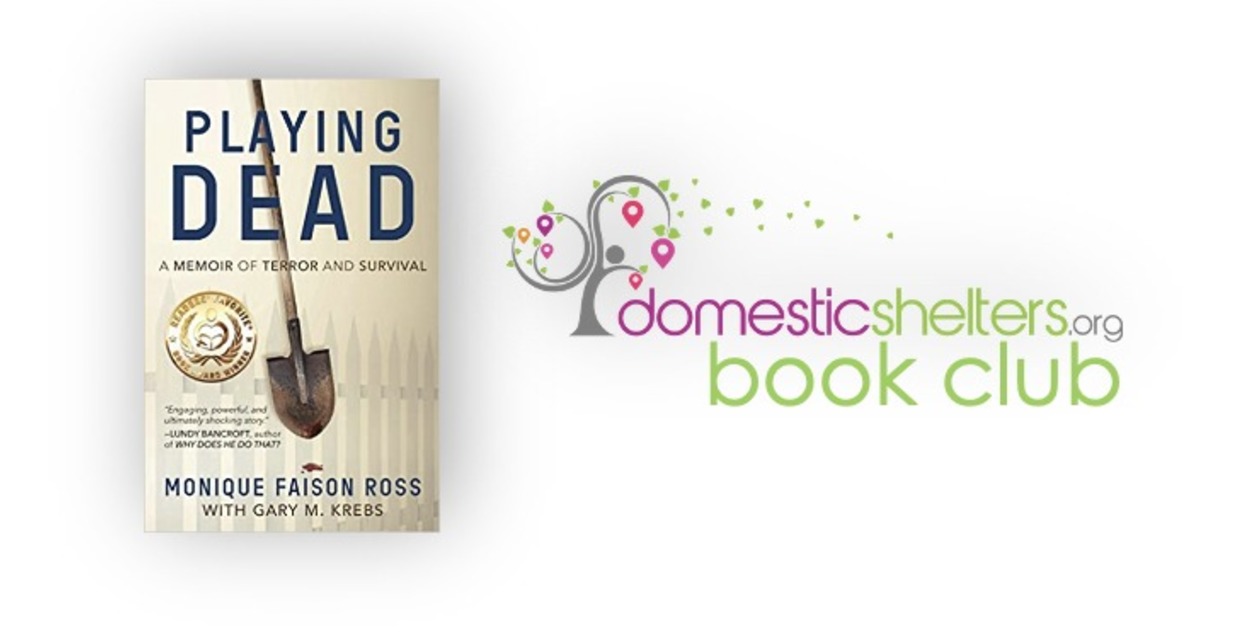 Released last July, Monique Faison Ross’ memoir Playing Dead is a harrowing true-life story of the author’s near-miss with death at the hands of her abusive husband. It illustrates to readers just how far an abuser will go when a victim tries to leave. It’s also a warning, not just for women seeing red flags with their partner, wondering if things could escalate (spoiler alert: they will). It’s also a warning to abusers: If you come for strong women, they can and do fight back.

Faison Ross, the daughter of San Diego Chargers football player Earl Faison, met her husband, whom she calls Chris in the story (though that’s an alias for safety reasons), when they were both 16 and attending high school in San Diego. At 18, she was enrolled at the University of California, San Diego with future plans of becoming a surgeon when she became pregnant. She and Chris married, went on to have three children and settled in Florida.

Thirteen years later on Oct. 27, 1997 at age 31, Chris tried to kill his wife by kidnapping her in front of their children, taking her to a deserted construction site and beating her over the head with a metal shovel before dragging her into the woods and leaving her for dead. Faison Ross survived and managed to crawl to a nearby road and flag down help.

For years, Faison Ross says friends urged her to tell her incredulous story but she resisted. She wasn’t a writer. And plus, it was hard to relive it. But then, she decided it was time. She wanted her story to serve as a warning, helping other potential victims to recognize the signs of escalating abuse that slipped past her.

Four years into the writing process, Faison Ross didn’t think she could finish. It just wasn’t coming together. Then, she was introduced to author Gary M. Krebs, who would become her co-author and help her story come to life on the pages. “It was too emotional, and I’m not a professional author.” Krebs, she said, took all of her thoughts and organized them, chapter by chapter.

Playing Dead soon became a finalist for the Kindle Book Award and won a 5-Star Readers Favorite for autobiography nonfiction and The Gold Award from Readers’ Favorite Book Review. And now, much to her chagrin, Hollywood may soon be in Faison Ross’ future—she says a producer is currently considering their book for the big screen.

“It was never in my imagination that something like that would happen,” she says. Below, we asked Faison Ross how she became a survivor.

Your book walks readers through the escalation of your ex-husband’s abuse, from control to physical assaults, aimed at not only you, but your children and your dog. He even once referenced the O.J. Simpson trial during an argument and told you, “You know, OJ got away with it.” Still, you admit that, for a long time, you didn’t think of yourself as a victim of domestic violence. Why do you think that was?

Faison Ross: I saw it as him having an out-of-control temper. I assumed he was going to get it together at any moment. If someone had told me that certain behaviors—strangulation, stalking—led to lethal action, death or severe injury to the victim or loved ones ... I had no idea. It wasn’t until that split second that he picked up that shovel [the night he tried to kill her] that I knew I was in danger.

I go over it time and time again. What is it that prevents us from seeing the danger right in front of us? I think the closer we are to someone, the more we want to believe that they couldn’t cross that line. And so, I think it’s critical to know that anyone could cross that line.

When you told Chris you wanted a divorce and found an apartment to move into with your kids, you describe the split in the book as “surprisingly amicable.” Chris even helped you load furniture into a U-Haul. Did that set off alarms in your head like it did to me when I read it?

Faison Ross: At first, when he seemed to take it well, I was suspicious of that. We talk ourselves out of things. I thought, maybe he finally realizes I’m free of her too and I’ll be happier and the kids will be happier. So I dismissed any worries. The happiness I felt ... I just wanted to be free of him. I didn’t care about anything else as long as the kids were safe and we had food.

But soon things changed, and you realized he was stalking your every move. He followed you to work, he threatened your new boyfriend, even though he admitted to seeing someone new himself. And, he was also trying to get full custody of the kids. What was his reason?

Faison Ross: Three months of full-time stalking. I averaged ten 911 calls a week at one point. He had all this planned from day one. He was trying to line everything up—fighting me for custody so I could lose them. Trying to send them back to California [where his parents lived]. It was so he could kill me without them around.

The day he tried to kill you, hitting you repeatedly with a metal shovel, what were you thinking? Did you believe you were going to die?

Faison Ross: I don’t think I had time to think about dying. There’s nothing more important to me than my children, in the whole wide world, but at the time of fight or flight, you’re not thinking about anything but fear. How do I get away? The fear, the panic, when those blows were coming to my head, I didn’t feel any pain. I didn’t feel anything until I was rescued.

And you did get away, amazingly. And someone rescued you. And you were in the ICU when you learned what horrifying fact?

Faison Ross: He was moved to the same ICU as me after an officer shot him. [After Chris was found, police cornered him and he charged at one with a knife. A police officer guarded Ross’ door while she was in the hospital.]

Chris was sentenced in 1998 to 26 years in prison, but was released in 2014 after serving just 16 years. How do you process the anger that comes with him being essentially free right now?

Faison Ross: The laws need to be changed. There are loopholes that allowed him to serve only part of his sentence. My only comfort is that he has to register as a sex offender everywhere he goes. [On the day he tried to kill Ross, he also sexually assaulted her.]

Do you worry about Chris trying to find you or your now grown children?

Faison Ross: I do. I worry about it all the time. I monitor him on the sex offender registry. I have a lifetime order of protection. I personally have not heard from him since 1998 when I last confronted him in court. But what’s interesting is, my PTSD, my fears, they’re not about him for some reason, but it’s someone. At some point after the initial years, my mind changed it to anyone. Anyone could come get me. I know it’s not logical, but they’re my fears. For example, my wife and I [Ross married her wife Leah in 2012] used to live in Connecticut and our house backed up to a brook with a wooded area. I would let my dog out at night and, opening the door, I just knew a sharpshooter was in the trees and was going to shoot me dead. Every single night. For the last 23 years, these things popped through my head all the time.


Do you worry about him doing to someone else what he did to you since he’s been out?

Faison Ross: You’re the first person to ask about that. I do. I worry about that. I worry the police will show up one day—let’s talk to Wife #1 to see how she survived. He’s such as master manipulator at making people think that he’s going to improve or get better that it would take several years of him being with someone. Gosh, I hope that never happens. But I don’t believe he’s changed. In his twisted mind, I think he somehow blames what happened on me.

What’s next for you? Another book? Activism? Or just enjoying being a mom and now, a grandmother?

Faison Ross: People have asked me to write the next phase [after the attack], but it wasn’t pretty, it was stressful. But people want to hear that. Maybe ... I just can’t imagine it. I do speak at many of the events I’m requested to do. But I’m fearful in guiding [survivors] in the wrong direction. I say, “Ask the expert. All the information is online.” There’s a real way to go about leaving a relationship like this. Call someone, talk to someone who’s in the field. They know so much better—I only know my own story.

Hear more from Faison Ross in her In the Limelight interview with host Clarissa Burt.