Back Next
Building App
Start your search here for domestic violence programs and shelters near you.
Learn More Got it
Home Articles DomesticShelters.org Book Club Trans and Non-Binary Survivors Speak Out In a New Book 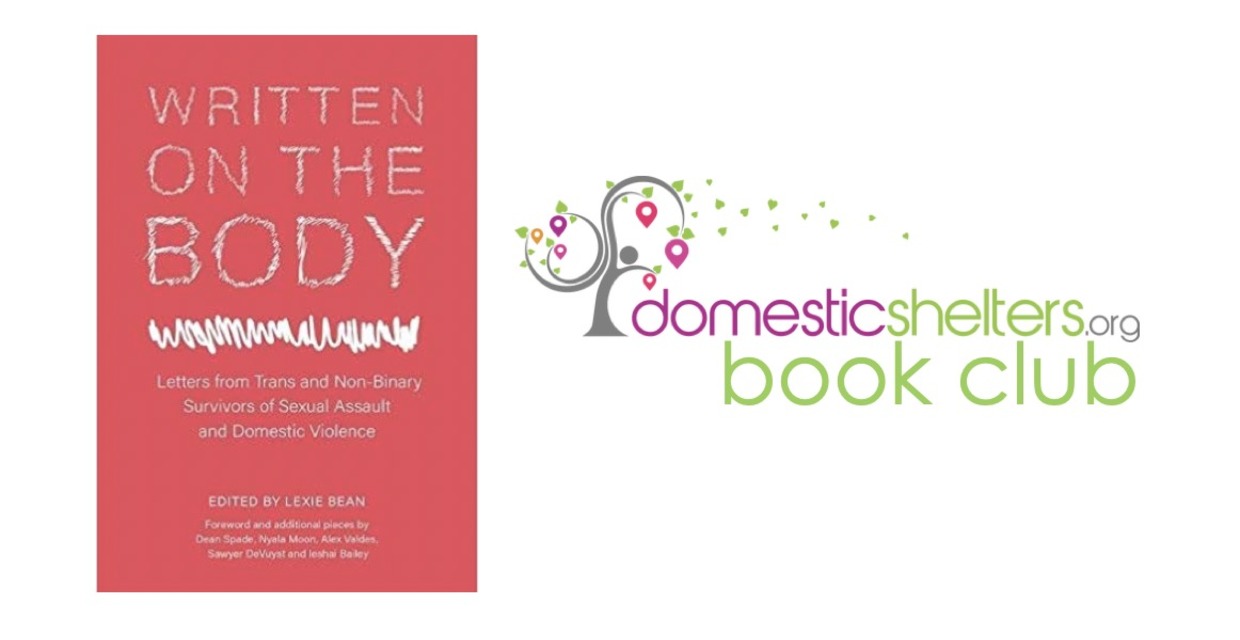 “For gender rule-breakers, finding words and images about our bodies and sexuality that ring familiar is a matter of survival. We need different words, different images, different frames for understanding ourselves and our parts and reclaiming what is stolen by meanings that have been forced upon us.” - Dean Spade, author, from the introduction to Written on the Body: Letters from Trans and Non-Binary Survivors of Sexual Assault and Domestic Violence

In our third selection for the DomesticShelters.org Book Club, we’ve chosen a brutally candid anthology of stories written by survivors. Written on the Body: Letters from Trans and Non-Binary Survivors of Sexual Assault and Domestic Violence is a collection of letters written not to individuals, but rather, to body parts.

From one author’s back—“i am sorry/i never stretch you towards/the sky/i care more about hiding my breasts/than your wellbeing”— to another’s eyes—“You saw me forced out of that relationship, on the night before Thanksgiving. I couldn’t help but fill you up with tears, as the street became our home”—the letters in Written on the Body are poignant and raw, sometimes touching on abuse, rape or other difficult to discuss topics, and deserve a trigger if not safe-for-adults-only warning.

“It is worth going slow and planning for support,” writes the book’s opening author, Dean Spade.

The letters were collected by New York writer and editor Lexie Bean, 27, an abuse and assault survivor who says they have long written letters to themself as a way to connect to their body.

“When I was in college, I was dealing with a lot of PTSD from childhood. I didn’t have that label, of course, but I just felt like I was always falling apart. That’s how I started writing letters to my body parts because I literally felt like I was leaving pieces of my body behind.”

Bean, who says they identify as either non-binary or “trans-boy-ish,” compares coming out a little over two years ago to “something that was covered in dust and then blew off … it’s something that’s been there all the time, but there wasn’t the space to describe it.”

Born in Ohio and raised in Michigan, Bean says they hope this book supports survivors who are coming out but who don’t have access to a queer community.

“The idea for this anthology is … here’s a community you can hold on to.”

Written on the Body is Bean’s first traditionally published book, but it grew from two self-published works before it—a similar, letters-to-our-body-parts tome, Attention: People With Body Parts, in 2012 and, the following year, Portable Homes, letters from domestic abuse survivors.

Below, we asked Bean a few questions about their book.

DomesticShelters.org: Written on the Body is a collection of letters to and about body parts. This book does not hold back, so if people are sensitive to reading about body parts or sex, this book would not be for them. Why do you feel it’s important to be so frank?

Bean: I believe, especially with trans and survivor narratives, there’s a lot of pressure to have a pretty ending. I don’t find that relatable, it’s almost dehumanizing. Being honest and full and complex is the most humanizing thing possible. That’s anti-violence work. Because people experience abuse when it’s forgotten that the person receiving the violence can have real feelings.

Bluntness is a part of humanization. In the past, I have censored my story or reshaped my body in a way to make it easier for other people to hold or understand. A lot of that comes down to feeling like I’m a burden somehow. I know that deep down that’s not true. But it’s a big part of the trans mentality. I want to push back against that.

DS: How did publishing this book affect your own process of healing from abuse?

Bean: I did not make the healthiest decisions for myself when working on the anthology and put most of my energy on supporting other people. Once it came out and I had to speak on it, I had to suddenly become more accountable and take my own advice.

I experienced abuse for the first time as a child with incest. The way I had coped with that for too long was by seeking out people in relationships that replicated what I normalized. Even after the release of this book, I have experienced rape. And I still had the wave of shame—is it my fault? Is this what really happened?

I’m thankful I know enough to be able to have that conversation with myself, but at that same time I’m that person who feels pressured to have that perfect ending. I think people want to have that feeling that there’s something to look forward to…and I think there is but they coexist.

A good friend of mine who’s also experienced incest told me, one of the hardest things is you don’t remember a before so it’s hard to imagine an after. So, it’s been taking a lot of work.

DS: How did living through both child abuse and abuse in an adult relationship shape you?

It lasted a few years. Leading up to, if I blamed certain members of my family a lot for staying in these unhealthy relationships [when I was] a child. Now, have more empathy for some of the women in my family.

A lot of trans people also come out when they’re with someone, and end up dealing with that other person’s shame. Like, ‘Oh, that person was identifying as a straight man but no longer is.’ It’s an internalized homophobia and transphobia. So, one of the reasons I stayed is because I thought no one else would ever love me.

DS: What do you mean when you wrote, “Is it right to want to shift rape culture away from me because I’m not a woman?”

Bean: In the context of the #MeToo movement, when those posts first started coming out, they said, ‘Say me, too if you are also a woman who’s had this experience.’ Because I’m a part of some more radical circles of people, some would change to just say ‘person’ but the fact that it was default ‘woman’ was complicated for me. I understand women are very vulnerable in this world and I was raised as one and seen as one but I don’t know if I say #MeToo, do I have to claim myself as a woman in order to validate myself?

DS: Who is this book written for?

Bean: That’s a really good question. It’s for the people directly affected [by abuse] but I also think it’s for anyone who’s learning how to love a trans person. I think it’s also for other survivors regardless of gender identity.

Trans people are often dehumanized. We are more vulnerable to receiving abuse and not having resources afterward. People who are put in positions of support would benefit from reading it—teachers, advocates or the like.

DS: Was there a reason you choose to leave bylines off the letters and list the contributors in random order at the end of the book?

Bean: At the end of the day it doesn’t matter…well, it does and it doesn’t. Others trying to figure out if it’s a man or woman speaking is how a lot of trans people live on a daily basis. You’re holding people’s words for what they give. Also, a lot of trans people live daily with a question of enough-ness. Am I trans enough? Even deeper than that is will I be believed? That overlaps with questions a cis-gender survivor would ask— have I taken the steps for people to believe my story?

DS: What do you hope people take away from this book?

Bean: To know that it’s OK to love trans people. It’s more than OK. I think also acknowledging that there is no ‘before’ and ‘after.’

DS: What do trans and non-binary survivors need most to support them after abuse?

Bean: More resources. Even within the #TimesUp and #MeToo movements a lot of people I know still feel like they have to lie in order to ask for help. Trans people do not have access to a woman’s shelter.

In my case, being a trans-boy, when I came out as trans, I was told, you only feel this way about yourself because you were raped. I have received different versions of that statement in question. A lot of trans people don’t come out because they don’t want to be perceived as a ‘crazy woman’ who hasn’t healed properly. There needs to be more conversations that get into this complexity.

People with different layers of identity stay in toxic situations. Even within health and sex-ed classes this is an important conversation. Where I grew up, in Michigan, every queer person has dealt with some form of domestic violence and has tried to leave the state and some of them succeed and some don’t and those who don’t are dealing with really severe alcohol issues. The overlap is really important, geographically. That part of the country is on my mind a lot… in some ways I feel survivor guilt for getting out.

Do you have questions for editor Lexie Bean about their story or the stories in their book? Send them to Amanda@DomesticShelters.org by May 27 for a chance to be included in our follow-up discussion with Bean.